In continuation of the series of posts with our friends on the Nordstrom Technology team we’re going to be creating a simple StackOverflow client utilizing the technologies discussed in Part 1 – Tools & Libraries.

The image to the right is the final screen that will be presented to the user.

Before we jump into code let’s take a look at the anatomy and organization of the project.

As mentioned in Part 1 we completely decouple the service layer from the view layer.  Projects that combine these become extremely unwieldy, limit code reusability and are much harder to test. 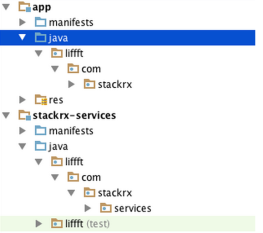 In the editor be sure to select ‘Android Library’. Also make sure the library is included in your app build.gradle as a dependency

The services build.gradle should include any libraries shared between the application front-end and the services layer.

Notice how we have the new Material Design cardview library only in the app dependencies but the services library contains Roboguice which is used both in the services and app.

Android applications are often organized by object type but we organize by feature.

We do this for the following reasons:

We’ve spent a lot of time thinking of ways to keep our code base as uniform and readable as possible.  Following good practices from day #1 will reduce code complexity, tech debt and refactoring time.  Many projects race to release but are so disorganized and non-uniform a rewrite is almost necessary afterwards.

Pulling open StackRXActivity (or any other classes in the view layer) you will see our code regions defined:

These are just like pragma marks in other languages.  To collapse the regions hit

to grow the region

The categories above are the same for every fragment, adapter, activity etc.

This won’t be crystal clear initially, but I’ll explain each region and its purpose.

This section is for dependency Roboguice injected classes

This section is for injected Roboguice views.  There should be no view.findByViewId’s littered throughout the code

Local constants are immutable constants pertaining to the class.  If they are string constants and used in other classes they should live in an AppConstants

Local class variables.  We tend to perserve the ‘m’ prefix.

Any constructors associated with the class

All life cycle methods.  For fragments and activities order matters.  Ex: onCreate should never be after onDestroy

Widget is used as a catch-all for widgets within the screen.

Listeners are all component type listeners in the view (OnClickListener, OnTextChangeListener)
Listeners should always be separate classes and never be inline in the life cycle methods.  Also set the listener in the code and never implement or extend on the class level.

Events are triggered by the EventBus.  All fragment/activity level uses of the event bus are captured here

Local methods pertaining to the fragment

Getters and setters the class

Let Android Studio name your variables for you! Rather than using a shorthand like  "adaptor" or "qda" for a “QuestionDetailAdapter” simply start typing the first letter of the class name to have it automatically named that.

We use the m prefix on all class level variables.  While this is always up for debate, you never have any of the time wasting this.variableName on constructors.

Too many projects do not name layouts or layout ids consistently.  Our convention is as follows:

The layout name always matches the class exactly.  This makes it is incredibly clear which layout file is for which class.

Variable naming should always match the layout name appended with what it is and its type.

How many times have we seen:

This gives no context.

Do you have any other tips / tricks for keeping your project sane and beautiful?  Drop us a comment!  Stay turned for Part 3:  Dependency Injection, RxJava, DAO’s and more!

Thanks for reading. If you have any questions or would like to know more about working with the Nordstrom Technology team feel free to shoot us an email!