How To Destroy a Month of Work in a Minute

A month of coding down the drain.

“What are the top features you’d look for in a Pinterest analytics product?” we asked the client, prepared to hear an agenda for our demo.

We expected to pull back the curtain on a solution for exactly those problems, and awe them with our intuition and customer insight.

Our client’s answer to our question was not what we’d anticipated. We didn’t support any of the use cases they enumerated. Every single feature they mentioned focused on tracking activity across all Pinterest users for their ecommerce site. Our entire product focused on engagement around their Pinterest account. We’d completely missed the mark.

We’d just finished meeting with a number of friends at social media agencies, where many had expressed a need for analytics for Pinterest. Pinterest was new; it didn’t yet support any tracking or work with any of the big analytics packages. Also, the existing products were overly complicated for the social platforms they did support. They wanted something simple, something they could use to show their clients they were doing a good job.

Perfect. We could easily solve this for them. We started work on an MVP, confident that the Pinterest API could easily cover this use case.

Except it wasn’t easy.

As we moved higher within the organizations, engaging with financial buyers, things became more complicated. At the time, social media was seen as a bit of a black art. A lot of social folks operated on instinct rather than data. Buyers didn’t want to pay for something that risked showing their efforts in anything but the best possible light.

No problem. We’d switch customers, focusing on their clients instead. These clients, big ecommerce brands with a strong social presence, definitely wanted to know social engagement on their accounts, right?

We emailed a few friends in social media at some big brands and asked them if analytics for Pinterest were important to them. They said yes. Slam dunk. We spent the rest of the month frantically finishing the MVP to demo.

Which brings us back to the client demo. What did we do wrong?

We’d built a product for our first customer segment but were trying to sell it to our second. And we didn’t even realize a difference until our first sales pitch.

We’ve learned our lesson the hard way; we now always vet our assumptions by asking customers to explain the value proposition back to us, in detail. Remember, while everyone may claim to go to the gym to get “in shape”, depending on who you ask, “in shape” may mean “ready for bikini season” or it may mean “strong enough to lift a car”.

The old annoying cliché about assumptions is half right. I certainly felt like a bit of an ass leaving that meeting.

When to Call Bullshit on Paul Graham?

“You should call it 360scope. And get rid of the little bug guy” was PG’s advice, explained reddit cofounder Alexis Ohanian. “But reddit turned out to be a great name, and ‘the little bug guy’ has turned into one of the most iconic parts of the reddit community. 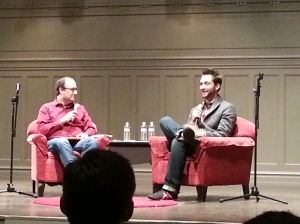 Alexis is on a 175 stop tour for his new book, Without Their Permission. On Monday night he stopped by Seattle’s Town Hall to be interviewed by Geekwire’s Todd Bishop. Topics ranged from the silly – alternative names for reddit (Ooglyaboo) and his favorite Star Trek captain (Picard, no hesitation) – to the more serious topics of his book – entrepreneurship and politics.

There was a lot of great advice for entrepreneurs from his time running reddit, Hipmunk, and Breadpig, his interactions with Paul Graham and YCombinator, and his time as an investor and advisor to over 60 companies.

One of the most valuable themes Alexis touched on is calling bullshit on some advice – even when it’s from someone like Paul Graham. “You’re going to know your users better than an investor or an advisor. They don’t spend all day, every day, thinking about your customers – but you do.”

Sometimes, the answer is none of them. People will say things like “I think users will be turned off by the cute bug mascot” or “360scope would make sense because the scope of your news is everything, like every direction in a circle, and there are 360 degrees in a circle.”

If you want to know how to effectively call bullshit on advice, cite your customers to back up why you think your advisor is wrong.

“Well, I showed 37 people the reddit alien, and the universal reaction was ‘awwwwww I love it!’”

“We interviewed 53 attendees at the conference this weekend, and the biggest complaint 50 of them had was not being able to find a place to stay. 43 of them even ended up crashing with strangers they met at the conference.” (Sounds like something the founders of Airbnb could have said to an advisor who challenged the premise of the company.)

Investors are an invaluable resource for insights and advice, but it’s critical to remember that you live and breathe your customers. If an advisor ever tries to predict what your customers will do based on gut instinct… get out there, interview some, and then maybe you can say “Bullshit. We have stories from a ton of people indicating otherwise.” Stories and proof trump gut instinct.

Even if that advisor is Alexis Ohanian.

Without Their Permission is available now, and check out Alexis’s tour dates to see if he’s coming to a city or University near you. It was a fantastic event, he is a great speaker, and it’s worth going out of your way to attend.